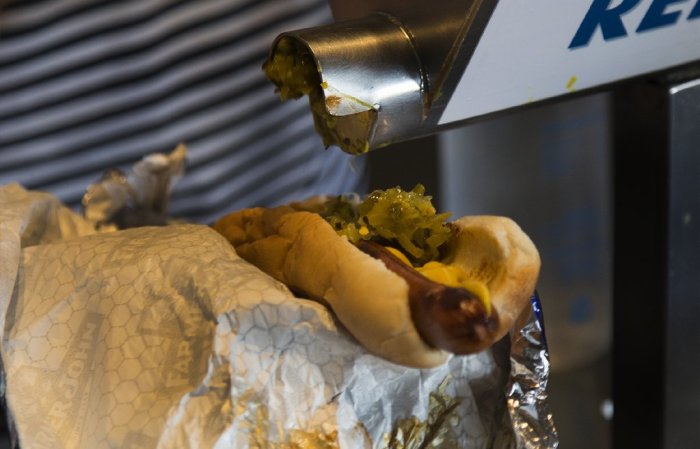 The sausage is long and perfectly pipe cleaner straight. The bread hugs it like a glove one size too small, and at both ends, the vaguely orange meat protrudes. It comes twisted up in a silver foil wrapper branded in blue, retrieved from a covered metal heating tray, where it has waited — maybe for longer than a little while.

There’s relish and onions from hand-crank dispensers. There’s ketchup and school-bus yellow Morehouse mustard from spigots. (There’s even Dijon mustard, but who would do that?)

Legendary announcer Vin Scully has majestically advertised the hot dogs on the radio for more than 40 years — a Southern California institution endorsing another institution.

For generations, Angelenos have gotten the message. Ever since the Dodger Dog was created in the 1960s, its producer, Farmer John, has sold more than 3 million of them every year — about 2 million at Dodger Stadium, and the remainder at grocery stores.

Baseball, more than any other sport, relies on nostalgia, and the Dodger Dog is no different. Peel away the memories, unfold the foil stamped with the Farmer John logo in Dodger blue, and what you’ll find is “a supermarket-quality dog,” said Joe Fabrocini, owner of Fab Hot Dogs and a local hot dog specialist.

The Dodger Dog is a tradition, a “part of Dodgers baseball culture, a staple,” outfielder Andre Ethier said.

But how does it taste?

“It tastes exactly how you want it to taste,” said Ethier, who admitted he’d only eaten one Dodger Dog, back in 2007 during a Fourth of July clubhouse celebration.

“It’s been awhile. I can’t even remember,” Scully said Friday, after finishing a lunch of ribs and steamed vegetables in the press box diner.

When the Dodger Dog was created in 1962, its primary innovation was length. A small mural behind the top deck seats tells the story.

Concession stand manager Thomas Arthur introduced it as the Footlong Dog, a tribute to the Coney Island hot dog in New York. But the frankfurter measured about 10 inches, and fans complained. The Dodger Dog was born.

Scully began to endorse Farmer John products soon after the Dodger Dog was introduced. Back then Dodger Stadium had few endorsements, and Scully became closely associated with the brands whose advertising copy he read on the air. Once, Dodgers outfielder Dick Allen’s wife introduced Scully to the Allens’ daughter as Farmer John himself.

“You do get identified with it,” Scully said.

Scully, for the record, stands by the product: “The ones they have here are as good as I’ve ever tasted. Without a doubt.”

Kraig said the Dodger Dog’s popularity is an example of how hot dogs became central to the experience of attending baseball games. By the 1950s, Kraig said, baseball’s businessmen had successfully sold ballparks as eating destinations. Soon, hot dogs like the Dodger Dog and the Fenway Frank in Boston thrived.

In the last few decades, as Dodger Stadium and other parks experimented with sushi, barbecue pork sandwiches, shrimp cocktails and knishes, the Dodger Dog never changed. It didn’t matter whether the Dodger Dog tasted good. According to stadium lore, fans were so attached to them that in the ’90s, when Dodger Stadium chefs tried to boil the hot dogs instead of grilling them, complaints forced the stadium to install more grills.

Richard Pink, co-owner of Pink’s Hot Dogs in Hollywood, never fails to get a Dodger Dog when he’s at a game. He declined to compare the flavor of his hot dogs to those at Dodger Stadium.

“I’m not going to say anything bad about a competitor,” Pink said. “But the Dodger Dog is an experience. You’re tapping into something that goes beyond taste.”

Suzanne Tracht, the head chef and owner of Jar in Beverly Hills, agreed. Tracht’s cooking often draws praise for the way she is able to update retro dishes with modern flair. But at Dodger Stadium with her kids, what she’s looking for is a classic Dodger Dog with yellow mustard.

“The smell just brings you in,” Tracht said. “It tastes really good, there.”

Lupe Medina of Elysian Village says she can barely afford Dodger tickets. But every time her family goes to a game, everyone drops $5.50 on a Dodger Dog. When they watch the game at home, they buy them in packs of 24 to barbecue.

“It’s not the best hot dog. But there’s something about Dodger Dogs,” Medina said. “You just can’t watch the game without it.”

Pink’s hot dogs will never change, and neither should Dodger Stadium’s, Pink said.

“If something sells well, and people enjoy eating it, whether it tastes great or not great, then it’s a good product,” Pink said. “It’s sort of like loving the Dodgers. Winning or losing, we support them.”

A few years ago, Dodger Stadium executives set out to develop a premium hot dog. After several taste tests and multiple meetings, they settled on the Brooklyn Dodger Dog, sold for $7.50.

The Brooklyn Dodger Dog is thicker and has an all-natural casing that snaps pleasingly when you bite into it.

The deep red, slightly shorter sausage is sandwiched in a lightly toasted bun and wrapped in butcher paper.

Dodger Stadium head chef Jason Tingley said that the Brooklyn Dodger Dog was not an attempt to challenge the popularity of the Dodger Dog. This year — like every year the Dodger Dog has been in existence — more than two-thirds of the stadium’s total hot dog sales will come from fans who crave the original Dodger Dog.

At Saturday’s postseason game against the Cardinals, Robert Rocha of Echo Park was proof of the Dodger Dog’s popularity. He had eaten four by the sixth inning.

He was sure he had room for another.